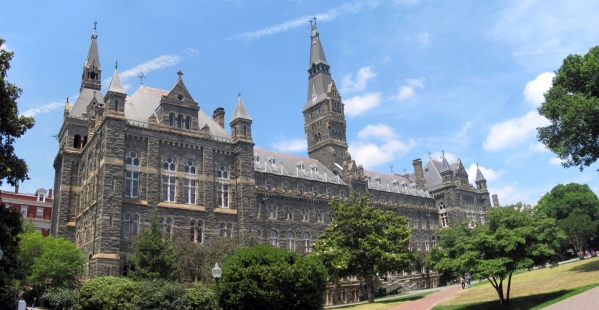 Georgetown University, a private university in Washington DC, is the oldest Catholic and Jesuit higher education institution in the US. Its alumni include two former US presidents: Bill Clinton and Lyndon Johnson; as well as several other heads of state, including King Felipe VI of Spain. Having been founded in 1789 by John Carroll, the US’ first bishop and archbishop, on a hilltop overlooking the Potomac River, Georgetown awarded its first bachelor’s degrees in 1817. The American Civil War nearly forced the closure of the university, with the student body dropping from 313 to 17 between 1859 and 1861, but it was in the aftermath of the conflict that Georgetown became the institution that is known today. Patrick Healy, the university’s president between 1873 and 1882 and the first African American to earn a PhD, reshaped the institution’s curriculum to place a focus on history and the natural sciences, and started the construction of Healy Hall, the flagship Flemish Romanesque building at the heart of the campus. Nowadays the university is divided into nine undergraduate and graduate schools, including Georgetown College, which offers a liberal arts programme, and the Edmund A. Walsh School of Foreign Service, which has educated heads of state and politicians from around the world. With more than 7,000 undergraduate and about 10,000 postgraduate students, about 11 per cent of Georgetown’s students are from overseas, being drawn from about 130 countries. Although it has always been independent of the Catholic Church, Georgetown’s Jesuit heritage continues to be influential, with education at the university emphasising service to others, particularly the vulnerable and disadvantaged. Georgetown also runs a school of foreign service in Doha, Qatar, and offers study abroad opportunities at villas around the Mediterranean. Alumni and sports teams of Georgetown are known as Hoyas. Prominent Hoyas include US defence secretary Robert Gates and his predecessor Donald Rumsfeld; José Manuel Barroso, the former president of the European Commission; and King Abdullah II of Jordan. Actor Bradley Cooper is another Georgetown alumnus.

Maude
This comment was minimized by the moderator on the site

In addition to being a great school with lots of ressources, Gerogetown University benefits from being situated next to one of the biggest libraries in the world. Great opportunities for archival lovers.

Olivia
This comment was minimized by the moderator on the site

Georgetown University was not on my radar until I started looking for a school that would open my eyes to the possibilities that existed beyond a formal education. While Georgetown is an incredible university for academics, it is also a...

Georgetown University was not on my radar until I started looking for a school that would open my eyes to the possibilities that existed beyond a formal education. While Georgetown is an incredible university for academics, it is also a university that teaches individuals how to think beyond themselves. The Jesuit values and legacy of the leaders of Georgetown encourage students to do big things in their lives, the lives of their community, and thus the globe. I have learned so many priceless lessons from my professors about compassion, determination, and challenging what is possible. The network of Georgetown alumni is full of people who want to change the world. In my three years at this university, I have grown as an individual in ways I never thought possible. My capacity for greatness has been expanded and increased through the confidence that Georgetown has given me. I am now fully equipped to enter into a world that has several problems and to be the solution for those problems.