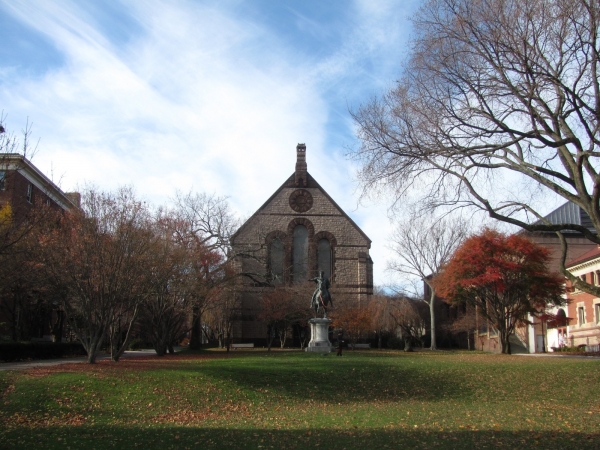 Founded in 1764, Brown is the seventh oldest university in the United States, and one of its most renowned higher education institutions. It is part of the Ivy League and, as an institution that prides itself on openness, was the first of the members to accept students from all religious affiliations. Originally called the College of Rhode Island, Brown’s first home was Warren, Rhode Island before it relocated to College Hill, overlooking the state’s capital city Providence, in 1770. Some 34 years later, in recognition of a $5,000 gift from alumnus and leading Providence businessman Nicholas Brown, the university was renamed to reflect today’s title. Today’s picturesque campus is made up of 230 buildings over 150 acres within walking distance of downtown Providence and close to the lively Thayer Street, Wickenden Street and Wayland Square where students and local residents mix, among ample shopping, dining and entertainment. The university’s sports teams play under the name of the “Brown Bears”. Theodore Francis Green, a former Rhode Island governor and US senator, introduced a brown bear as the university’s mascot. Today, Bruno the Brown bear is still the university’s prime cheerleader. A defining characteristic of the university was its introduction of the “Brown Curriculum”, which altered undergraduate education immeasurably at the institution. It was inspired by Francis Wyland, Brown’s fourth president, who argued that a student should have the freedom to “study what he chose, all that he chose, and nothing but what he chose”. The new “Open Curriculum”, which was launched in 1970, allowed students to develop their own core curriculum rather than be bound to a prescribed “liberal arts education”. It has defined Brown’s undergraduate experience to this day. Besides study, Brown is a leading research institution. The university has connections to seven Nobel laureates including alumni Craig C. Mello and Jerry White who won for physiology or medicine and peace respectively, and current physics faculty member Leon Cooper. Fields Medal winner David Mumford is emeritus professor of applied mathematics at the university. Brown’s diverse student body is exemplified by notable alumni from all walks of life. From the father of American education Horace Mann and The Office star John Krasinski, to Princess Theodora of Greece and Denmark and financier and philanthropist John D. Rockefeller, the university’s people are varied. Emma Watson, who played Hermione Granger in the Harry Potter films, graduated from Brown in 2014, having transferred from the University of Oxford.

Brown is an amazing university. The students are all very friendly, willing to help and passionate about their studies. The professors are incredible, really care about their students and are always willing to talk to them. There are also many opportunities for undergraduate research. However, what sets Brown apart from many other elite universities is the fact that it has an open curriculum. As a student you are able to take classes in any area you might be interested in, as you are never worried about completing a core.

Brown University bridges the openness of a larger urban campus environment with a more intimate student-faculty relationship. Its student body is particularly diverse and and the liberal arts curriculum is as flexible as it is intellectually...

Brown University bridges the openness of a larger urban campus environment with a more intimate student-faculty relationship. Its student body is particularly diverse and and the liberal arts curriculum is as flexible as it is intellectually stimulating.

I love my school. Who doesn't love Brown's open curriculum?? I also visited the dorms where Emma Watson stayed when she was still here - and her aura remains, with the quidditch games you can observe/participate in weekly on the Main Green....

I love my school. Who doesn't love Brown's open curriculum?? I also visited the dorms where Emma Watson stayed when she was still here - and her aura remains, with the quidditch games you can observe/participate in weekly on the Main Green. SciLi, one of the main libraries on campus, has irrefutably the most spectacular architecture that one can ever find anywhere - comparable to that of the best dorms on campus, New Pembroke 4 and Grad Center. We have a lot of activities for all sort of interests that anyone may have as well - The N. Donut Run, or the Brown Noser, being those that are most famous and renowned, far superior comparing to the Daily Herald or the Entrepreneurship Program. Brown is so left leaning that there is absolutely no income discrepancy between Christina Paxson and workers at the Ratty - our most Commie dining hall where everyone takes any amount of food they need - no matter whether they choose to participate in the meal plan or not. You can find out more about us on social media. We are extremely active on social media - the amount of posts on Dear Blueno and BBAs astound me on the daily. We have pretty fun subreddit(s) as well if you are a hippy like we are!