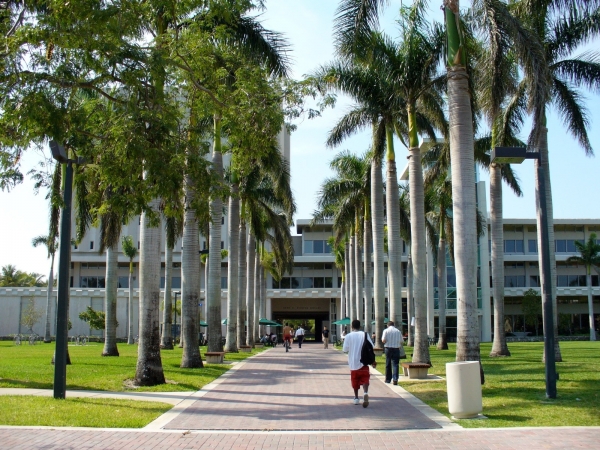 The University of Miami, which was founded in 1925, is a private research university located south of the city of Miami in Florida, US.

The first building, today called the Merrick Building after George Merrick who gave the college $5 million in its first year, was left unfinished for more than two decades because of economic difficulties – with classes run instead at a nearby hotel, giving the university the early nickname of “Cardboard College”. Today, however, an endowment of about $2.58 billion in revenue, which came to the university during the fiscal year 2014, has seen it expand and consolidate its estate.

Miami has 12 colleges and schools on different campuses, including the Miami School of Law on the 260 acre main campus, the Leonard M. Miller School of Medicine (which trains at least 1,000 students in health-related programmes), and a school focused on the study of oceanography and atmospheric sciences.

The main campus is in Coral Gables, south of Miami, and includes a theatre, arboretum and architecture centre. A large pool named “Lake Osceola” with a large fountain in the centre of the main campus serves as a focal point for the university.

First founded by citizens during the Jim Crow era as a white, coeducational institution, it became the first major college in the South with a black football player on scholarship in 1966.

Some 16,000 students enrolled in 2014, at about a 40 per cent acceptance rate. Notable alumni include wrestler Dwayne “The Rock” Johnson, actor Sylvester Stallone and singer Gloria Estefan. Former president Donna E. Shalala led the University of Miami between 2001 and 2016 and served under President Bill Clinton as the longest-serving US Secretary of Health and Human Services.

Master of Science in Finance