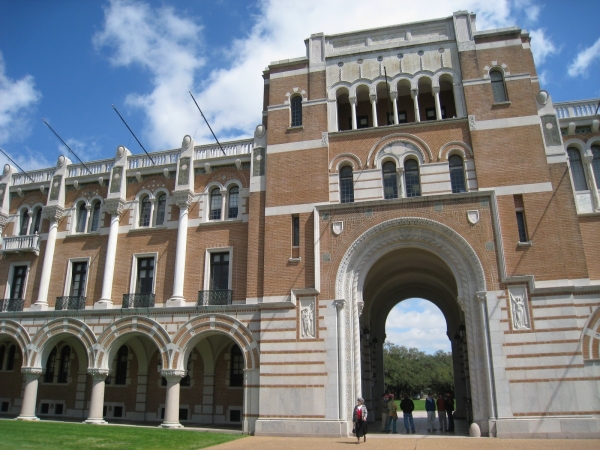 Rice University is an intimately sized research university in the heart of Houston, Texas, with a focus on undergraduates and a reputation for unconventional thinking. Edgar Odell Lovett , the first president of Rice, said “[We must] keep the standards up and the numbers down”, and even today there are only a few thousand students. Lovett introduced a college system whereby students and faculty would live, eat and learn in the same environment. Over 70% of undergraduates and nearly all first year students live on the 300-acre campus and everybody is a member of one of 11 co-ed colleges. There are no sororities or fraternities and students of different majors and ages live together. Rice has eight schools of Architecture, Continuing Studies, Engineering, Humanities, Business, Music, Natural Sciences, and Social Sciences, with an undergraduate student-to-faculty ratio of 6 to 1 and a median undergraduate class size of 14. Since Rice’s inception, exams have not been proctored as students are trusted not to cheat. Rice’s history dates back to 1891 when businessman William Marsh Rice created a charter for the William Marsh Rice Institute for the Advancement of Literature, which required that the institute would begin only after his death. In 1900 he was murdered by his valet, who planned and failed to inherit his estate using a forged will, and in 1912 the institute was born with 77 students, including women, and 12 members of faculty. Research is not just for faculty members, as over half of the university’s undergraduates also take part, and Rice has been instrumental in the creation of nanotechnology, artificial hearts and Buckyballs. Rice alumni include several US Congressmen and Cabinet Secretaries, nine astronauts, nine Major League Baseball players, two Nobel Laureates and four fictional literary characters. The university has a tradition of elaborate practical jokes, the most famous being in 1988 when three engineers, three scientists and an English major developed a successful plan to rotate the university’s 2,000 pound statue of William Marsh Rice by 180 degrees.

MA in Statistics and PhD in Political Science

This University doesn't care about its students. It only wants to improve its ranking and its ratings. They don't care about students' well-being. Teaching is awful. Exams are so hard you would think they actually taught us well. No support for...

This University doesn't care about its students. It only wants to improve its ranking and its ratings. They don't care about students' well-being. Teaching is awful. Exams are so hard you would think they actually taught us well. No support for students. I honestly wish I never came to this school.