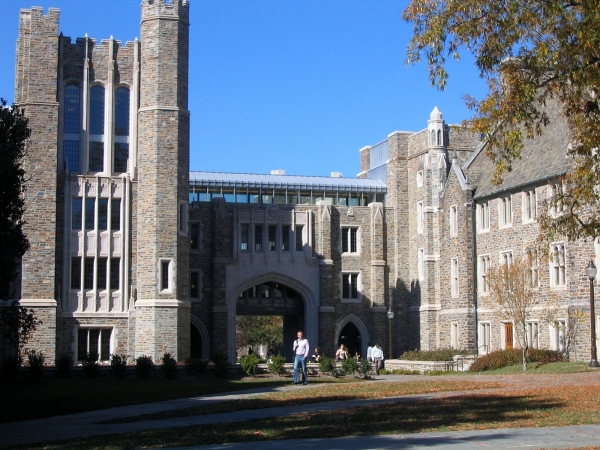 Duke University, located in the US state of North Carolina, is one of the wealthiest private universities in America and a top producer of international scholars. It was founded in 1838 as Trinity College but became known as Duke University only in 1924 after the Duke Endowment was established. The university describes itself as younger than most other prestigious research universities in the country. The original campus was rebuilt in Georgian architecture as is now known as East Campus, after the 1930 addition of West Campus, Gothic in style and home to the impressive Duke Chapel tower. There are 10 schools and colleges; the oldest is Trinity College of Arts & Sciences, founded in 1859, and the youngest is the Nicholas School of the Environment, established just 25 years ago. About 95 per cent of all students graduate within four years of enrolling. In the 2015 entry class, the most popular majors were public policy, economics, biology, biomedical engineering and psychology. Sports and performance art both thrive at Duke University, which competes in athletics and basketball, and hosts more than 60 art events a year. In 2014, Duke Kunshan University opened in China, with the aim of integrating liberal arts education with Chinese tradition. Duke also has a partnership with the National University of Singapore to collaborate on a joint medical programme, which took its first students in 2007. Overall, the university is one of the most competitive to get into. For the “Class of 2019” cohort, only 11.4 per cent of the applicants received a place. Unusually, the university requires undergraduates to live on campus for the first three years. More than 75 per cent of the students also pursue volunteering opportunities, supporting the university’s mission, “knowledge in service to society”. The most notable alumnus is Richard Nixon, the 37th president of the United States. He graduated from Duke University with a law degree in 1937. Duke alumni also head many Fortune 500 companies including Apple, Cisco Systems, JPMorgan Chase and PepsiCo. Melinda Gates, who co-founded the Bill and Melinda Gates Foundation with her husband, also attended the university. The alumni community also includes prominent novelists such as William Styron, who won the Pulitzer Prize for Fiction for his novel The Confessions of Nat Turner and also wrote Sophie’s Choice, and Anne Tyler, who received the Pulitzer Prize for Breathing Lessons. The university has an extensive private research library network, with three libraries on its West Campus, two on its East Campus, a library at the marine laboratory and separate libraries for business, divinity, law and medicine. (https://www.timeshighereducation.com/world-university-rankings/duke-university)

Understanding 9/11: Why 9/11 Happened & How Terrorism Affects Our World Today

Fabiola
This comment was minimized by the moderator on the site

Attending Duke University for my Bachelor's of Science has been a very meaningful and impact experience both academically and professionally. Academically, Duke has some of the greatest and most inspiring professors I've met, many of whom are...

Attending Duke University for my Bachelor's of Science has been a very meaningful and impact experience both academically and professionally. Academically, Duke has some of the greatest and most inspiring professors I've met, many of whom are experts in their field, and who take the time to know their students. As a research institution, Duke places great emphasis on research and development both at a national and international level, which is something I highly value and that I consider imperative for innovation and growth. Moreover, there is great focus on global immersion and affairs, from Duke Immerse to Study Abroad programs. Beyond the academics, it was the people I met at Duke that made my experience very special and unforgettable. I was able to establish a solid connection and support system during my time at Duke and to this day. Something that makes Duke very unique is its vast and strong Duke Alumni Network both nationally and worldwide, and they work very closely with LinkedIn and other professional networks, which has been extremely rewarding!

Duke University provides the perfect learning ecosystem for any student aspiring to pursue and develop his/her personal and professional interests. All through my time as a graduate student pursuing Masters in Engineering Management, I have...

Duke University provides the perfect learning ecosystem for any student aspiring to pursue and develop his/her personal and professional interests. All through my time as a graduate student pursuing Masters in Engineering Management, I have always been surprised with the plethora of learning opportunities that Duke provides to its students. Respected and reputed faculty across disciplines makes in-class learning super enjoyable and the extremely helpful Duke Alumni Network constantly helps its alma mater with industry experiences. Additionally, I thoroughly enjoyed the fact that I shared the class with students from more than 20 countries worldwide. In sum, the world studies at Duke! Go BlueDevils!

Throughout the application process, I felt that Duke was truly invested in my future enrollment. It meant a lot that such a great school cared about a single individual and my personal experience. I felt wanted.