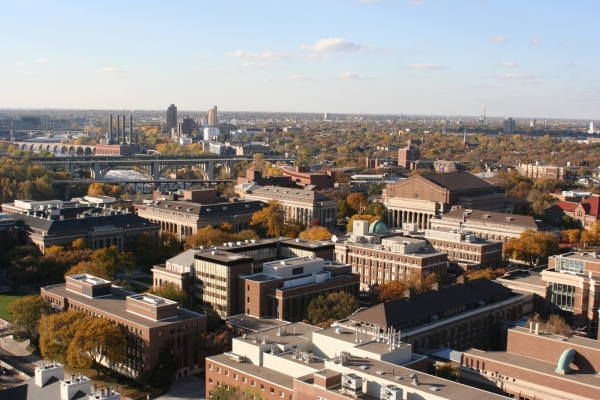 The University of Minnesota is the second largest institution of higher education in the Midwest of the US by enrolment and has several campuses spread across Minnesota. Founded in 1851, it is a public research university belonging to the Committee on Institutional Cooperation, a membership group of higher education institutions in the Midwest. The largest of the five campuses is in Twin Cities, with more than 50,000 students making it the sixth largest campus student body in the US overall. There are other campuses are in Crookston, Duluth, Morris and Rochester. It has more than 300 research, education, and outreach centres and institutes, on everything from the life sciences to public policy and technology. The university also became a member of the Laser Interferometer Gravitational-wave Observatory (LIGO) in 2007, and has led data analysis projects searching for gravitational waves – the existence of which were confirmed by scientists in February 2016. Notable University of Minnesota alumni include eight Nobel Prize laureates, two Pulitzer Prize winners, and two vice-presidents of the United States – Hubert Humphrey and Walter Mondale. Bob Dylan also enrolled before dropping out, and former UK deputy prime minister Nick Clegg won a scholarship to study there for a year. The Golden Gophers are the institution’s intercollegiate sports team, with the university competing as a member of both the Big Ten Conference, one of the oldest collegiate athletics conferences in the US, as well as the Western Collegiate Hockey Association. Some 60 per cent of matriculants to the university are considered Minnesota residents, and some 40 per cent are out-of-state residents, according to the university’s statistics. An estimated 78,190 donors brought the university’s total endowment value in 2015 to about $351 million.

I attended the UofM from 20011-2015. The university has a great Liberal Arts program, coupled with a great diverse faculty and different sports programs that help ensure complete student success. The student body is extremely diverse, made up of...

I attended the UofM from 20011-2015. The university has a great Liberal Arts program, coupled with a great diverse faculty and different sports programs that help ensure complete student success. The student body is extremely diverse, made up of students from more parts fo the world than you would expect, bringing a lot of diversity and rich cultural experience to the school.

Fairly diverse university with great faculty. Fantastic campus right in the heart of Minneapolis. The city boasts of HQs of 25 of the Fortune 500 companies so a lot of opportunities to go around specially in IT and Healthcare.

UMN is great place to meet talented like minded people and network with a wide range of future professionals. Great place to meet people from various countries and cultures. The professors are also very helpful