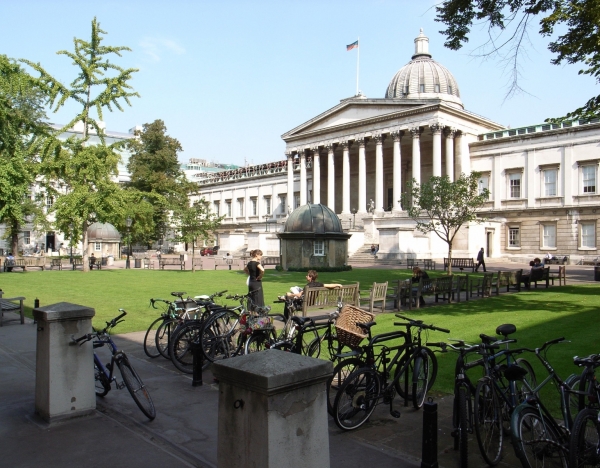 UCL was founded in 1826 to bring higher education to those who were typically excluded from it. In 1878, it became the first university in England to admit women on equal terms as men. Located in the heart of London, UCL is a constituent college of the University of London and a member of the Russell Group, with approximately 850 professors and over 6,000 academic and research staff.  UCL comprises 11 faculties: Arts and Humanities, Built Environment, Brain Sciences, Engineering, the Institute of Education, Laws, Life Sciences, Mathematical and Physical Sciences, Medical Sciences, Population Health Sciences, and Social and Historical Sciences. Throughout its history, UCL has been the birthplace of numerous significant scientific discoveries, with 29 Nobel Prizes awarded to UCL students or staff, including William Ramsay, who won the Nobel Prize in Chemistry in 1904 for his discovery of the noble gases. In addition, the UCL academic community includes 53 Fellows of the Royal Society, 51 Fellows of the British Academy, 15 Fellows of the Royal Academy of Engineering, and 117 Fellows of the Academy of Medical Sciences. The student body is nearly 36,000-strong and UCL has one of the largest systems of postgraduate study in the country. Nearly 52 per cent of students are engaged in graduate studies. Students hail from approximately 150 countries worldwide making up more than one-third of the university’s entire student population. UCL was the first British university to open a campus in Doha, Qatar, where it runs a centre for the study of cultural heritage. It also has a presence in Adelaide, South Australia, which includes a space science and an energy policy institute. UCL alumni include film director Derek Jarman, the writer Lynne Truss, Baroness Patricia Scotland, who became the UK’s first female Attorney General, and Marie Stopes, who founded Britain’s first family planning clinic. The university’s Latin motto translates as ‘Let all come who by merit deserve the most reward.’ https://www.timeshighereducation.com/world-university-rankings/ucl

Childhood Adversity: The Impact of Childhood Maltreatment on Mental Health