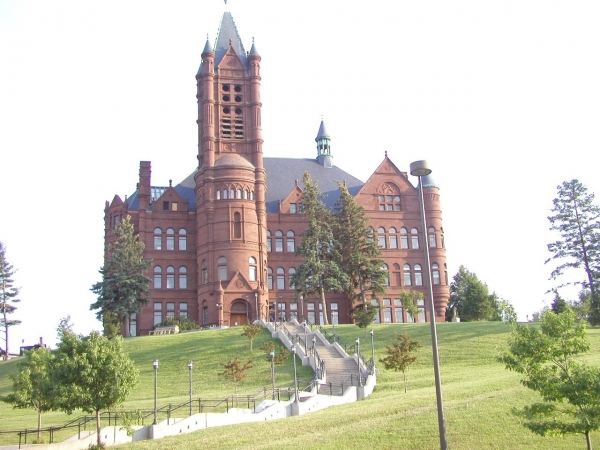 Syracuse University, within driving distance of Toronto, Boston, Montreal and New York City, is home to more than 20,000 enrolled students, from over 123 different countries. It has 12 academic units, including the Graduate School, the School of Information Studies, the Maxwell School of Citizenship and Public Affairs and the David B. Falk College of Sport and Human Dynamics. In 1874, just four years after its founding, the university offered the very first bachelor of fine arts (B.F.A.) degree in the United States. To this day the College of Visual and Performing Arts is highly reputed and produces eminent alumni, including visual artist Sol LeWitt who received his BFA from Syracuse University in 1949. Syracuse University also founded one of the first schools of journalism in the country in 1934, which would become the S.I. Newhouse School of Public Communications. Currently, minority students make up more than a quarter of all enrolled students. In fact, the university has a long history of promoting diversity and inclusion since its founding as a coeducational university. The fourth African American woman physician in the United States graduated from Syracuse in 1876, and American football player Ernie Davis, who graduated in 1962 was the first African American to win the Heisman Trophy for excellence in college football. Eileen Collins – the first woman to command a NASA space mission – earned a degree in mathematics and science in 1978, and five years later actress Vanessa Williams was the first African American crowned Miss America while pursuing her theatre major at the university. Joe Biden, the Vice President of the United States as of 2016, attended Syracuse University College of Law after meeting his first wife, Neilia Hunter, who was studying at Syracuse. In 2005, Syracuse University was named one of 81 ‘Colleges with a Conscience’ for its outstanding community involvement, including responsible university policies, financial support, political activism and civic engagement. Since the Second World War Syracuse University has been putting effort into transforming from a liberal arts college into a world-leading research university, by adding programmes and staff to focus on medical research, social work, engineering and other disciplines. In total, $86.7million was awarded to the university in 2015, from federal government grants, non-federal sponsors, foundations, and the State of New York. Syracuse’s athletic teams are known as the Orange, after the school’s official colour. Sports teams have reached 28 national championships. The university is spread over two campuses – Main campus and South campus - and additional building in downtown Syracuse. Most academic buildings and halls of residence are on the main campus, where a historic district of older buildings has been listed on the National Register of Historic Places.

Stanford University
Located in the heart of Silicon Valley, Stanford U ...