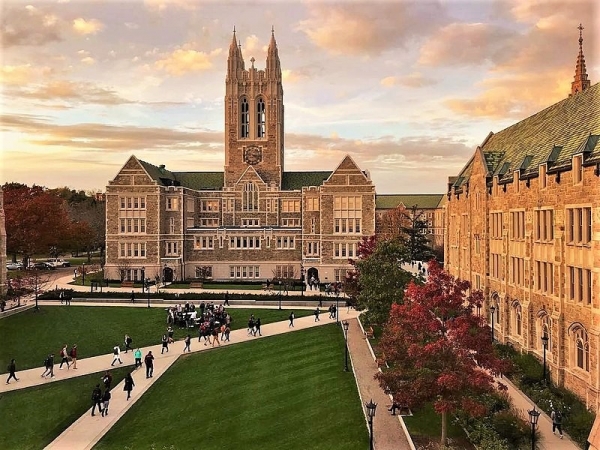 Founded in 1863, Boston College was set up by Jesuits to educate the city’s predominantly Catholic Irish immigrant community.

It is a private research university known as “The Heights” to its students and staff, owing to its location perched in the village of Chestnut Hill in Massachusetts.

Boston College has some of the earliest examples of collegiate gothic architecture in North America, and has expanded since its inception to include nine schools and colleges, primarily in the liberal arts.

The idea of a college for Boston was first announced by the city’s second bishop in 1825, but struggled to find its feet amid suspicion from Protestants in the city and its distance from Maryland, where Jesuits were better established.

It was continued, however, and received a formal charter from Massachusetts in 1863, with an intake of about 22 students the following year and a special emphasis on philosophy and theology – which continues today.

The 175 acre main campus outside Boston city centre has more than 120 buildings, with eight research libraries and more than 700 academic staff working across them.

Designed by Charles Donagh Maginnis, the campus was never completed along the lines of the architect’s plans for a complex cruciform layout, but the centre at least was built according to plan.

Gasson Hall, St Mary’s Hall, Devlin Hall and the Bapst Library are the key examples of the gothic style, and still seen as the campus’ recognisable middle.

Out of an applicant pool of 29,486, the college accepted about 9,000 on to its undergraduate studies for the class graduating in 2019, with some 14,000 in total enrolling – giving it an acceptance rate of about 29 per cent.

With an endowment of more than $2 billion as of 2014, Boston College is one of the wealthiest colleges in the region – although its wealth does not come close to Harvard’s $30 billion.

Helena
This comment was minimized by the moderator on the site

If you are planning to go abroad and you want to experience the full American college experience, BC is your place! The variety of subjects you can choose from is huge, all the professors I had were great, the abroad program coordinators were...

If you are planning to go abroad and you want to experience the full American college experience, BC is your place! The variety of subjects you can choose from is huge, all the professors I had were great, the abroad program coordinators were very sweet with all of us exchange students, and the location was very good too. It has a great campus life, lots of parties celebrations… everyday there's something new and exciting around the campus. The only thing kind of hard to cope with is the weather, but once you get used to is fine, and snow days are kind of great! I would recommend this university to everyone, an experience of a lifetime, defenitely worth it.

University of Texas at Austin
The go-ahead for a university to be built in Texas ...