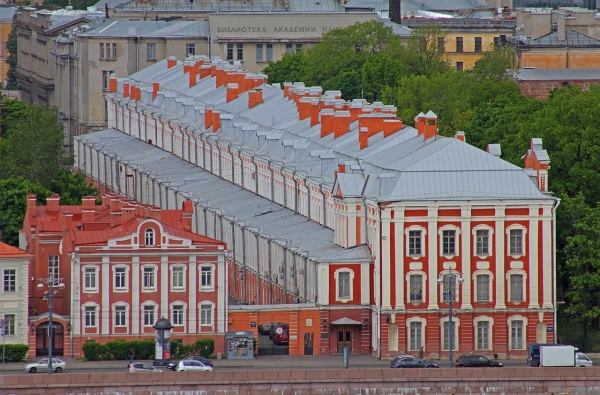 Saint Petersburg State University was established in 1724 by Peter the Great, and claims to be the first institution of higher education founded in Russia (a claim also made by Moscow State University).

Since its foundation, it has been known by many names, including the Petersburg Pedagogical Institute, Saint Petersburg Imperial University, and - during the Soviet period - Leningrad State University.

SPbSU, as it is known, has been graced by many elite scholars, including nine Nobel Prize winners. Among them are the physiologist Ivan Pavlov, physicists Aleksandr Prokhorov and Lev Landau, Wassily Leontief, and the economist and philosopher.

SPbSU has two main campuses, one of which is located on Vasilevsky Island in Saint Petersburg city centre, and another in Peterhof, an area to the southwest of the main town. The institution's main building is the a three-storey set of 12 red-brick buildings around 400 meters long, known as the Twelve Collegia. This is located at the Vasilevsky Island campus.

The library, home to some 7 million books, is also located at the Vasilevsky campus.

Vladimir Putin, president of the Russian Federation, is an alumnus of Saint Petersburg State University, as are prime minister Medvedev and the mathematician Sergey Smirnov.