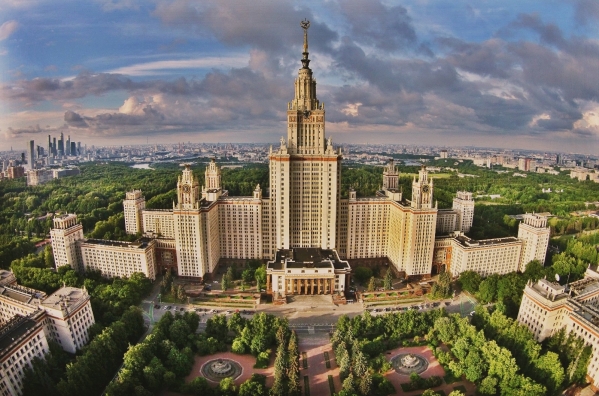 Moscow University is the oldest university in Russia. It was founded in 1755 by a decree of the Russian Empress Elizabeth on the initiative of an outstanding Russian scientist Mikhail Lomonosov, whose name it now bears. Moscow University was founded on St. Tatiana’s Day, which is now celebrated as Russian Students Day.

Presently, Lomonosov Moscow State University comprises 41 faculties and 377 chairs consisting of 7,500 Sc.D. and Ph.D. holders, more than 5,000 full professors and instructors, more than 300 members of the Russian Academy of Sciences and other Russian state academies working there.

The Lomonosov Moscow State University Board of Trustees was created in 2013. Its members are renowned scholars, deputies, public figures and members of the business elite. Russian President Vladimir Putin is Head of the Board of Trustees; the MSU Rector Victor Sadovnichy is the secretary to the Board.

Of 18 Russian Nobel laureates, 11 are graduates and professors of Moscow University. 12 percent of all discoveries registered in the USSR are attributed to MSU scientists. Moscow University is proud of all of its alumni; many of them have achieved great success in science, public activities and politics. Many world famous Russian scientists, writers, poets, publicists, historians, diplomats, figures in the art world, public and political figures have studied or taught at the University throughout its history.

There is a tradition in Moscow University to welcome distinguished foreign guests such as the acting and the former leaders of different countries; Nobel laureates; internationally renowned scholars; famous public and political figures; prominent figures in the world of science and art.

All-Russia Science Festival is an annual celebration of academic knowledge. The first Science Festival in Russia was organized in 2006 on the initiative of the MSU Rector Victor Sadovnichy. In 2011, the festival extended considerably and became a nationwide event. Today, the festival is held in more than 80 regions of the country. It is one of the most global Russian projects promoting science.

The aim of the Development Program of Moscow University is the creation of Vorobyovy Gory (Sparrow Hills) Scientific and Technological Valley – the university cluster uniting in one locality a network of specialized research organizations, start-ups as well as cultural, educational and sports organizations.

Research activities at Moscow State University are wide-ranging. More than 2,000 MSU scientists conduct research in 350 research areas and 30 interdisciplinary programs covering more than 1,000 subjects. Research is carried out at 70 enterprises in the field of chemistry and new materials, biotechnology, pharmaceutics, ecology and rational environmental management, development and production of scientific equipment.

MSU creates and develops its own artificial Earth satellites for the scientific and educational purposes, actively interacting with the largest state corporations Roskosmos and Rusnano. Within the university space program six satellites have been built. On April 28, 2016 the Lomonosov satellite, a modern space station, was launched from the Vostochny launching pad.

With the most powerful supercomputer in the post-Soviet space, MSU uses the new system to speed up the pace of unique research in the field of nuclear physics, genomic analysis, NPP safety assessment, forecasting of climate, development of new materials and pharmaceuticals, studying of structure of the Earth. The total peak performance for Lomonosov-2 Supercomputer exceeds 5 petaFLOPS; a new generation of supercomputers is being developed.

The Noah’s Ark Project is aimed at the preservation, research and careful use of the biological diversity of the planet. More than 80 expeditions for collecting samples have been conducted; more than 200 newly discovered animal species, plants, mushrooms and bacteria have been described. The average volume of data loading in the system is about 7,500 samples a month; the system has already acquired more than 1,000,000 samples. The MSU Digital Herbarium was created on the basis of the Project. The Project has helped to create and maintain the unique collections of live animals and plants, the cultures of plant cells and microorganisms, and human cell material.

For the time being, Moscow University has more than 700 operational agreements on scientific and educational cooperation with government and international organizations all over the world, foreign universities and research centers.

The Eurasian Universities Association (EUA) created in 1989 on the initiative of MSU unites 138 universities from 13 countries. In 2016, the Eurasian Network University was created on the basis of EUA.

There are more than 9,500 foreign students – undergraduates, graduates, postgraduates and interns – from 90 countries currently studying at Lomonosov Moscow State University.

Faculty of Mechanics and Mathematics