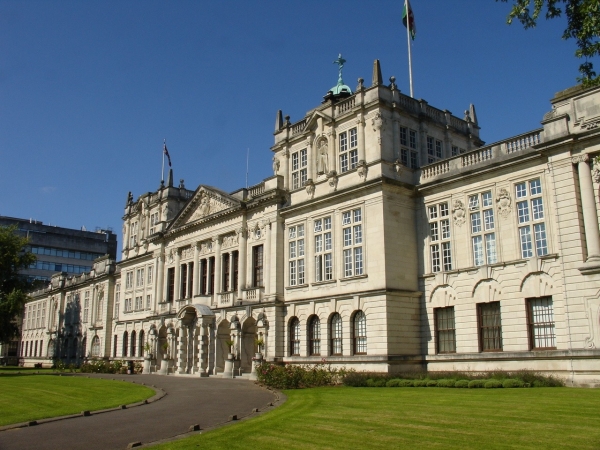 Cardiff University is situated in the heart of the Welsh capital.

Founded in 1883 with just 13 academic staff and 102 full-time students, it has grown quickly and it now caters for in excess of 30,000 students. It is the only Welsh university in the Russell Group.

Its 26 academic schools are organised into three colleges: Arts, Humanities and Social Sciences, Biomedical and Life Sciences, and Physical Sciences and Engineering.

It offers over 300 undergraduate degrees and more than 200 taught masters, diplomas and certificates, as well as providing professional short courses. About 6,500 international students from more than 100 countries are enrolled at Cardiff.

The university is made up of two large campuses, both close to the centre of Cardiff. Heath Park, a mile to its north, is on the fringe of 100 acres of parkland and playing fields. With the exception of Pharmacy and Optometry, it houses the university’s healthcare schools, sharing the site with the University Hospital of Wales. Study areas and IT facilities are open around the clock and, as well as libraries and lecture theatres, there is a swimming pool, fitness suite and squash court.

Cathays Park is the main campus and home to 22 of the university’s schools, as well as the main Student’s Union. Just half a mile from the city centre, it includes restaurants, shops, a nightclub and pubs. Among the tree-lined avenues and Portland stone buildings are modern study facilities, including labs, IT suites and lecture theatres.

Professors at Cardiff have won many prestigious awards including two Nobel Prizes, one in Chemistry and the other in Medicine. Many have been selected to join the likes of the British Academy and Royal Academy of Engineering, while the university itself has been awarded six Queen’s Anniversary Prizes.

It has an alumni network of 145,000, drawn from over 180 countries. Notable graduates include BBC newsreader Huw Edwards, the Olympic gold medallist Nicole Cooke, and a previous national poet of Wales, Gillian Clarke.