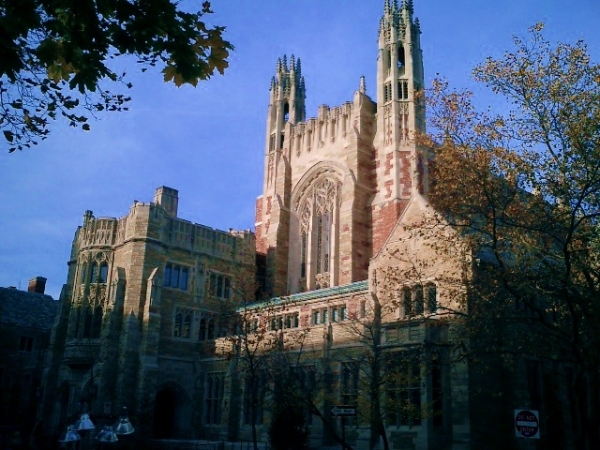 Yale University is a private Ivy League research university which is the third-oldest higher education institution in the US. Yale traces its history back to 1701, when it was founded as the Collegiate School in Saybrook, Connecticut, which moved to New Haven 15 years later. In 1718 it was renamed Yale College, in honour of Welsh benefactor Elihu Yale, and it was the first university in the US to award a PhD, in 1861. Yale’s central campus covers 260 acres of New Haven, and includes buildings dating back to the mid-18th century. The university is made up of 14 schools, and students follow a liberal arts curriculum, covering humanities and arts, sciences and social sciences before choosing a departmental major. Students also receive instruction in writing skills, quantitative reasoning and foreign languages. Unusually for the US, Yale students are housed in residential colleges on the model of the universities of Oxford and Cambridge. There are 12 historic colleges, and construction of two more started in 2014. Around one in five students is international, and more than half of all undergraduates receive scholarships or grants from the university. Yale has an endowment that exceeds $25 billion (£17.3 billion), making it the second-richest educational institution in the world, and a library that holds more than 15 million volumes, making it the third-largest in the US. Yale alumni and sports teams are known as “Bulldogs”, and many Yale graduates have gone on to notable careers in politics, the arts and science. Four Yale graduates signed the American Declaration of Independence, and the university has educated five US presidents: William Howard Taft, Gerald Ford, George H. W. Bush, Bill Clinton and George W. Bush. Twenty Yale alumni have won Nobel prizes, including economist Paul Krugman, while 32 have won the Pulitzer Prize. Other notable alumni include US secretaries of state Hillary Clinton and John Kerry, and actress Meryl Streep. Yale’s campus includes many famous buildings, such as the Beinecke Rare Book & Manuscript Library, the Peabody Museum of Natural History and the Sterling Memorial Library. New Haven is a city of about 130,000 people, located two and a half hours south of Boston, and an hour and a half north of New York. It has many shops, museums and restaurants, and is close to beaches, hiking trails and historic attractions.

Yale College is proving to be an excellent place for undergraduate life. Classes are rigorous and the freedom to choose allows students to explore a broad range of topics. Yale is also exceptional beyond academics. The residential college system...

Yale College is proving to be an excellent place for undergraduate life. Classes are rigorous and the freedom to choose allows students to explore a broad range of topics. Yale is also exceptional beyond academics. The residential college system and the impressive diversity of activities offered outside the classroom make of Yale a great social place as well.