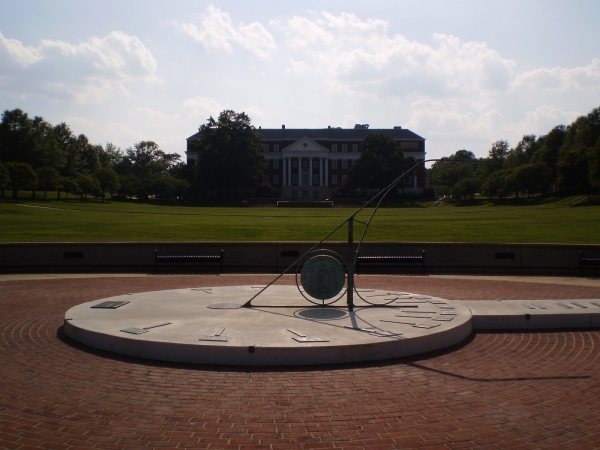 Founded in 1856, the University of Maryland is a public research university and the largest university in the Washington Metropolitan Area. The university has close funding and institutional links to the capital – receiving research funding from the National Institutes of Health, the National Aeronautics and Space Administration (Nasa), the National Institute of Standards and Technology and the Department of Homeland Security. It belongs to the Big Ten Conference, one of the oldest collegiate athletic conferences in the United States that includes the flagship public university in each of 11 states stretching from New Jersey to Nebraska. The membership also places the university within the Committee of Institutional Cooperation, an academic consortium of Big Ten universities and the University of Chicago, whose members generated more than $10 billion in research expenditure in 2012. The 1,250 acre campus, which started out as the 428 acres of an old sugar plantation, has redbrick Georgian buildings, a large central lawn called McKeldin Mall, and enough plants and trees to be designated a botanical garden. Morrill Hall, built in the 1890s, is the oldest structure still in use today. Almost 40,000 students on one of either 100 undergraduate majors and 120 graduate programmes join a number of notable alumni, including House Minority Whip Steny Hoyer, Google co-founder Sergey Brin, The Muppets creator Jim Henson, The Wire creator David Simon and Seinfeld co-creator Larry David. Nobel prizewinners are also among the staff, with John C. Mather, a Nasa researcher and physics professor, sharing the Nobel Prize in Physics in 2006 and Thomas C. Schelling sharing the Nobel Prize for Economics in 2005 – with two more faculty staff and two alumni being awarded in the past century. The college’s future was not always secured, and indeed the institution went bankrupt from 1864 to 1866 before reopening a year later with 11 students. The first woman earned her bachelor’s degree in 1919, and the first African American student graduated in 1952. The University of Maryland also hosts one of the largest communities of language scientists in North America, including more than 200 faculty, researchers and graduate students, who collectively comprise the Maryland Language Science Center.