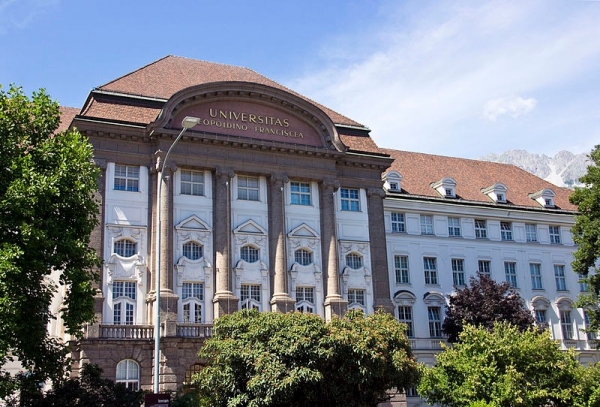 Considered to be the third oldest university in Austria, the University of Innsbruck was founded in 1669, with roots dating back even earlier, to 1562 when a Jesuit college was established.

The university had a tumultuous beginning and, over the years, was subject to a dissolution on two separate occasions.

Today, the university comprises 16 faculties (its most recent, the School of Education, opened in 2012), four interdisciplinary research platforms, and 33 research centres to facilitate networking and collaboration between different disciplines.

Physics, ‘Man and the Environment’, Cultural Conflicts, Scientific Computing and Molecular Biosciences are cited as being among its research priorities.

The university is located close to the Alps, bridging German and Romance speaking regions, where study programmes have developed to address the social, ecological and economic issues of the alpine region more widely.

Approximately 28,000 students are enrolled at the university, which boasts partnerships with 10 universities and co-operation agreements in place with another 400 worldwide.

Courses are taught primarily in German, with a limited number of courses in English available within the business school at master’s level and in the Political Science Department at undergraduate level.

It also has a number of accessibility programmes in place to ensure students from disadvantaged backgrounds are given the opportunity to access higher education. This includes the university’s partnerships with networks ASEA-UNINET and Eurasia-Pacific-Uninet, which works to integrate students from developing countries into European university setting.

Innsbruck is positioned between Munich in Germany and Verona in Italy, making it the Alpine region’s state capital. Renowned for its winter sports, and having hosted the Winter Olympics on several occasions, sport enthusiasts are often drawn to the university.

The city is also a popular tourist destination on account of its cultural offering and beautiful Gothic architecture.