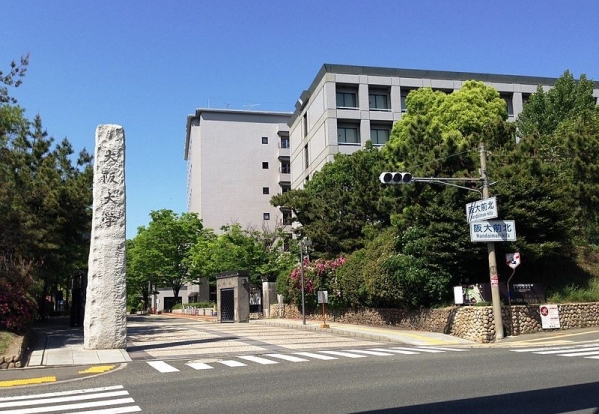 Osaka University was founded in 1931, when the Osaka Prefecture Medical School became Osaka Imperial University. This change was part of a national policy in Japan in which several imperal universities were established as centre of higher education and research. Originally the university had two schools – Medicine and Science – which increased to three in 1933 with the addition of Engineering, and five in 1949 with the addition of the School of Letters and the School of Economics when the university became Osaka University after the Second World War.

The university is spread across four campuses – Suita, Toyonaka, Minoh, and Nakanoshima – and is home to more than 15,000 undergraduates, 8,000 graduates and 2,000 international students, the majority of whom are graduates. They are taught by an academic staff of just under 3,200, with 3,645 part-time staff. Notable alumni include the Nobel Laureate in Physics Hideki Yukawa, Akira Yoshino, the inventor of the lithium-ion battery, and Sony founder Akio Morita.

Osaka is an industrial city in the Kansai region of Japan that has been called “the Manchester of the Orient”. It is the second-largest city in Japan after Tokyo and has a population of 19 million.

Giang
This comment was minimized by the moderator on the site

In terms of academic fields, OU has its stronghold in natural science majors (Engineering, Robotics, Med, etc.) but the array of departments is still limited compared to US colleges. And social sciences and humanity majors aren't shed as much...

In terms of academic fields, OU has its stronghold in natural science majors (Engineering, Robotics, Med, etc.) but the array of departments is still limited compared to US colleges. And social sciences and humanity majors aren't shed as much light on as their natural science counterparts. But I'm currently in the School of Human Sciences, which is quite rare in Japan, so I'd say OU might be a great choice for those interested in Socio, Anthropology, Kyosei studies etc. These are available in English for undergrad level only. And at the undergrad level, we tend not to dive so deep into 1 particular field say, Socio for example. In my experience, the academic journal database at OU is really limited. I can only access JSTOR and ProQuest for free, which imposes lots of restrictions on how updated my sources will be. Though this might be different for other students who utilize different databases on the uni's library website, I didn't receive so much active guidance from my professors regarding these databases. My EMI program is improving its quality by enhancing requirements from teachers. Even in my case when the program wasn't improved, I enjoyed the classes since the professors tried to conduct discussion-based classes and make them really interactive and interesting. It's a way for a Japan-based international student like me to mingle with exchange students of varied backgrounds and Japanese students. I wanna note that I'm from Vietnam and prior to studying at OU my education has been a public one. That is to say, I view my current experience at OU as a definite improvement from my high school education. Some of my classmates who used to go to international schools and study AP or IB remarked that the level of the classes might not have been an upgraded version from their high school experience since they're quite introductory. I think the treatment for international students is good in general (in terms of accommodation assistance, language support, etc.) because of the good operation of International College. But I feel that we're just co-existing with Japanese students without really penetrating into the life and impacting their international outlook. Some classes regarding cross-cultural understanding can be quite awkward and not really helpful because of the poor execution. Regardless, the Japanese can be friendly enough. I got to know my current Japanese close friends and senpais by actively participating in clubs and circles at school. I think cultural exchange might not be problematic, but internationalization initiatives can be more rigorous to make the international student community more salient.