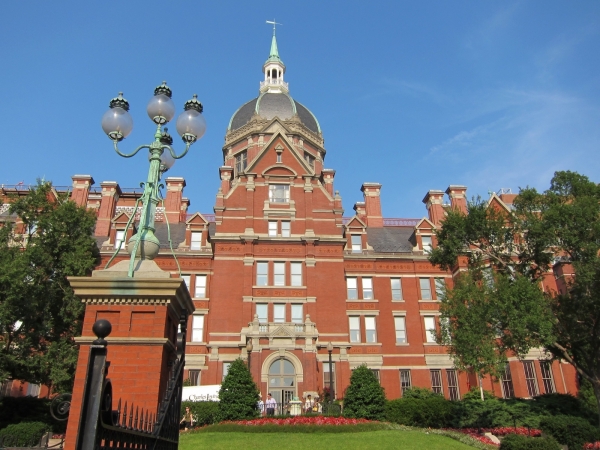 Founded in 1876, Johns Hopkins University (JHU) is a private research university based in Baltimore, Maryland. It takes its name from its first benefactor, the American abolitionist, philanthropist and entrepreneur, Johns Hopkins. The university’s motto is ‘Knowledge for the world.’ JHU serves more than 21,000 students through nine academic divisions: Zanvyl Krieger School of Arts and Sciences, Whiting School of Engineering, Carey Business School, School of Education, School of Medicine, School of Nursing, Peabody Institute (for music), Bloomberg School of Public Health, and the Paul H. Nitze School of Advanced International Studies. The university has four campuses in Baltimore with regional satellite campuses throughout Maryland, and a biotech hub north of Washington, DC. It has a presence in more than 150 countries including Argentina, France, China, Italy and Singapore, and an extensive study abroad programme. Medical and nursing students can take medical electives in 19 countries and all students pursuing a BA in general engineering are encouraged to spend at least one semester studying abroad. More than 3,000 of the university’s students are international, totalling 20 per cent of the student body, and representing 120 different countries. The university counts 36 Nobel Laureates among past and present faculty and students. Other notable alumni include Woodrow Wilson, 28th president of the USA, the journalist PJ O’Rourke, film director Wes Craven, and the Pulitzer Prize–winning columnist Russell Baker. University sports teams are known as the Blue Jays. Their team colours are blue and black and the blue jay bird, native to North America, is the team’s official mascot. Once a working-class port, Baltimore is now a thriving, culturally diverse city (Maryland’s largest) that has acquired the nickname ‘Charm City’. Its main campus comprises red-brick buildings, an iconic clock tower and vast areas of woodland.

PrEParing: PrEP for Providers and Patients

National Association of Schools of Art and Design, Commission on Accreditation