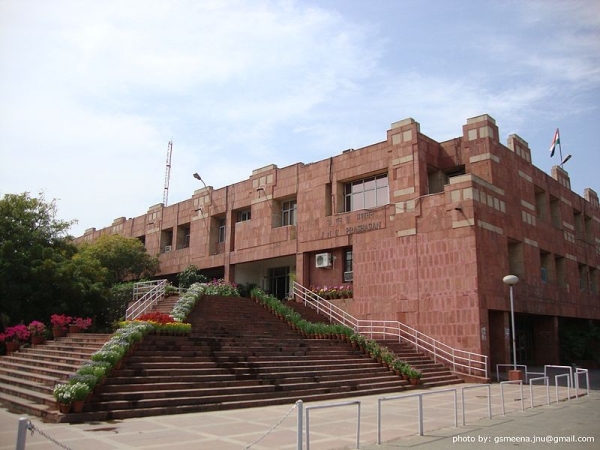 Named in honour of India’s first Prime Minister, New Delhi-based Jawaharlal Nehru University was started in 1969 with the aim of bringing "frontier disciplines and newer perspectives for old disciplines to the Indian university system". The following year it incorporated the highly-rated Indian School of International Studies and in 1976 moved into its 1,019 acre campus in the Arevali district.

The university states that it is "the foremost university in India and a world-renowned centre for teaching and research", with some official recognition. It was rated sixth among all institutions and second among universities in the National Institutional Ranking Framework for 2018, trailing the Indian Institute of Science in both categories. A year earlier it received the President of India’s "Visitor Award" for the best university in the country.

It is quite small for an Indian university, with fewer than 10,000 students, almost all of which are graduates.

It has a fiercely competitive admissions system. In 2018 there were 108,192 applicants for around 3,000 places, with the master's in international relations and area studies attracting 195 applicants for every place.

While traditionally focused on the liberal arts and applied sciences, it has diversified towards engineering and management studies in recent years, with an MBA introduced in 2019. Other new developments include the opening of the Jean Monnet Centre for Excellence in European Union Studies.

While its vibrantly political student culture has tended to the left, alumni hold two of the main posts in the BJP government re-elected in 2019. Former diplomat Subrahmanyan Jaishanker is Minister for External Affairs while Nirmala Sitharaman moved from her previous role as India’s first female Defence Minister to smash another glass ceiling as Finance Minister.

BTech in Chemical Engineering and MTech in Science

BTech in Chemical Engineering and MTech in Technology

BTech in Civil and Environmental Engineering and MS in Humanities

BTech in Civil and Environmental Engineering and MS in Social Sciences

Indian Institute of Finance
IIF established in 1987 as a non-profit autonomous ...