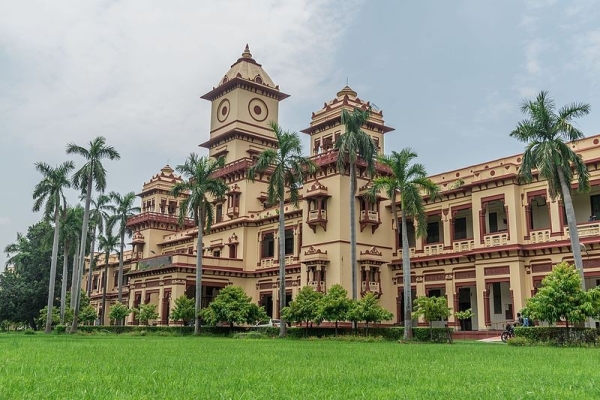 Banaras Hindu University (BHU), formerly known as Central Hindu College, is a public university, which was established in 1916 in Varanasi, Uttar Pradesh. It is the largest residential university in Asia, and is one of India’s Institutes of National Importance, each of which is intended to “serve as a pivotal player in developing highly skilled personnel”.

BHU was created with the aim to address India’s poverty and the lower income of Indians compared to Europeans, by focussing on technology and science to be used in their interest, as well as on Indian religion and culture. On 1,300 acres, the main campus is near the banks of the river Ganges, on the southern edge of Varanasi. The semicircular layout includes early 20th century examples of Indo-Gothic architecture.

There are more than 60 residential hostels for students, as well as housing for full-time faculty. The Shri Vishwanath Mandir, a 252-feet high complex of temples at the centre of the campus, took almost three decades to complete. Bharat Kala Bhavan, the art and archaeological museum, is most renowned for its Indian paintings, though it also includes archaeological artefacts, textiles, costumes and more.

Also on campus is the largest tertiary referral hospital in the region, Sir Sunderial Hospital, which is affiliated with BHU’s Institute of Medical Sciences. The 2,700-acre Rajiv Gandhi South campus in Barkachha, Mirzapur, about 60km from Banaras, houses the Agriculture Science Centre.

The university’s anthem, the Kulgeet, was composed by one of India’s most renowned scientists,, Shanti Swaroop Bhatnagar, who worked at BHU from 1921 for three years.

BHU has many prominent alumni and faculty, including Zen and the Art of Motorcycle Maintenance author, Robert M. Pirsig, who studied Eastern philosophy and culture there. One of BHU’s administrators, Sarvepalli Radhakrishnan, went on to become the President of India.

Indian Institute of Finance
IIF established in 1987 as a non-profit autonomous ...