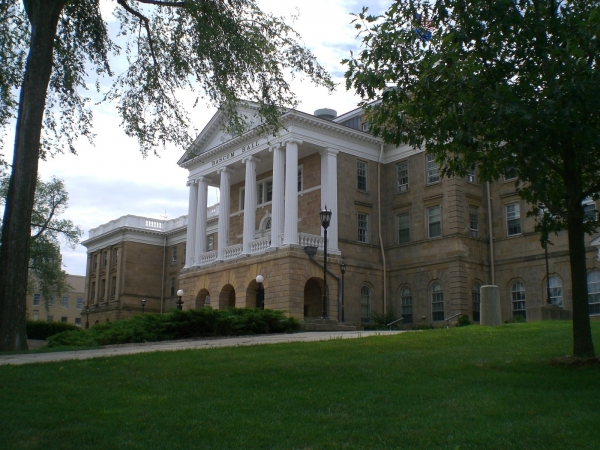 Located in Madison, the capital of the State of Wisconsin, the University of Wisconsin-Madison (UW) is a public, land-grant institution that was founded in 1848. It held its first class in the February of 1849. Home to 13 colleges and schools, the university’s main campus stretches over 900 acres along the southern shore of Lake Mendota. The city itself has plenty to offer students, including national landmarks and the colourful State Street and Capitol Square, lined with restaurants, coffee shops, music venues and boutiques. Madison is known as being a ‘green’ city, with plenty of opportunities for skiing, fishing, boating, and other outdoor sports. The newspaper USA Todayranked Madison fourth best cycling town in America for its network of biking paths and bike-share program. Its student body of 40,000 collectively represents 50 states and 124 countries. The university boasts almost 900 student organisations and its official mascot is the Bucky Badger. A research university, UW has been home to number of pioneering achievements, such as the discovery of vitamins in the early 20th century, the cultivation of embryonic stem cells in the late 20th century and, in 2010, the discovery of a new human species. Since its inception, over a dozen Nobel Prize awards have been awarded to faculty and alumni of UW. Other alumni include 33 Pulitzer Prize winners, the founders of the satirical news media company, The Onion, and the founder of Earth Day, the annual event that champions environmental protection. One of the university’s longest traditions is the ‘Wisconsin Idea’ – the principle that the university should enhance people’s lives beyond the classroom. The Idea has been synonymous with Wisconsin for over 100 years and has become the primary ethos of the university’s outreach efforts across the globe. The university’s motto is ‘Numen Lumen’, which translates as ‘God, our light’.

Master of Science (M.S.) in Chemistry