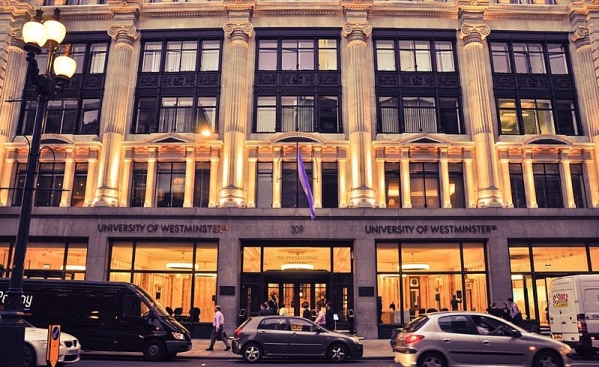 The university dates back to 1838, when the English engineer and aeronautics expert Sir George Cayley, founded the Polytechnic Institution at Regent Street. It was the first polytechnic in the UK and became the University of Westminster in 1992.

The university prides itself on its pioneering ethos and has been home to a number of notable moments in history. For example, in 1841 it opened the first public photographic portrait studio in Europe and hosted the first UK public moving picture display, organised by the Lumiere brothers, in 1896. More recently, it became the first UK partner university for UN Habitat, the agency dealing with human settlement and development.

With a strong emphasis on internationalisation, the university today opens its doors to over 22,000 students, hailing from every continent.

It is arranged across four campuses, three in central London (Cavendish, Marylebone and Regent Street) and one (Harrow) in north-west London, and comprises five faculties: the Faculty of Architecture and the Built Environment, the Faculty of Social Sciences and Humanities, Westminster Business School, Westminster Law School, and Westminster School of Media, Arts and Design.

The university’s central London location benefits from nearby access to the city’s many cultural attractions, while a recent £20m investment in its facilities has resulted in Westminster being able to offer fully-equipped sports facilities to students, as well as specialist resources, such as the purpose-built Financial Markets Suite.

It also has its own gallery spaces for the display of contemporary art and architecture, where exhibitions, events and public talks regularly take place.