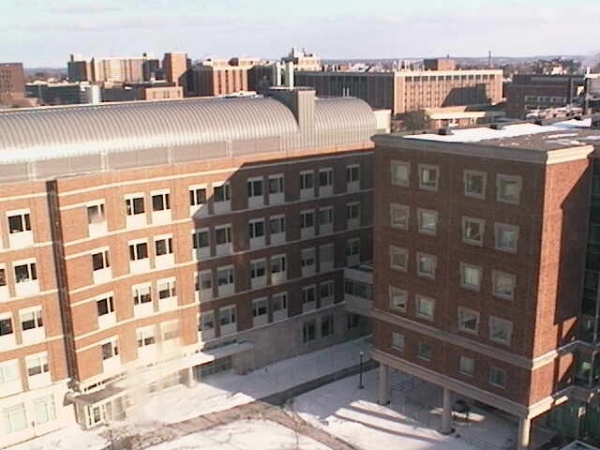 It serves around 11,000 students of graduate and undergraduate level, split roughly half and half between men and women.

The university comprises 158 buildings and around 2,000 faculty members. It prides itself on its intimate teaching style and claims a student-teacher ratio of 10:1.

The university is spread across four campuses, the main one being River campus, situated just south of downtown Rochester by the Genesee River. Its centrepiece is the Eastman Quadrangle, which is home to the Faculty of Arts, Sciences and Engineering.

The other campuses are the medical centre, the Eastman school of music – home to the large Eastman Theatre concert hall, which also serves the Rochester philharmonic orchestra – and the South campus located in the town of Brighton.

In 1929 the Institute of Optics was founded at Rochester, becoming the first educational programme devoted specifically to optics in America. As well as this, the Omega Laser Facility houses two of the highest energy and intensity lasers in the world.

The university has a total budget of around $3 billion and an endowment of roughly $2.2 billion.

It has an alumni network of more than 100,000 and eight Nobel Prize winners.

Rochester’s official motto “Meliora” translates from the Latin as “ever better” or “always better.”

Its official flower has been the humble dandelion since 1853 when the growing university, requiring more space, was given eight acres of cow pastures as a donation. According to legend, the well-fertilised pasture resulted in a profusion of dandelions that led to the flower’s adoption as the school emblem.

The Music of the Beatles

History of Rock, Part One