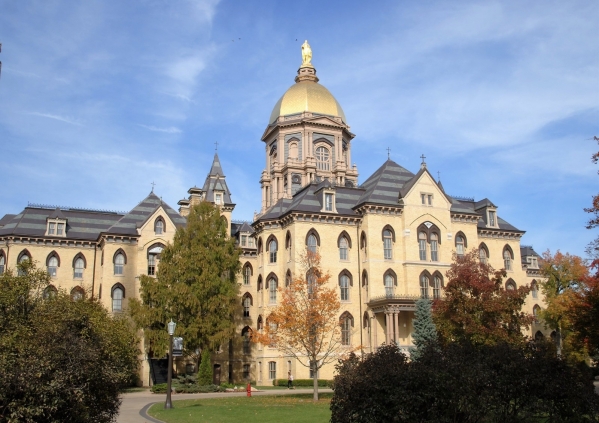 The University of Notre Dame is located in the US state of Indiana. Founded in 1842 by Reverend Edward F. Sorin, a priest of the French missionary order known as the Congregation of the Holy Cross, it was established with the aim of being one of America’s great Catholic universities.

Priests of the Holy Cross governed the university until 1967, when it shifted into a two-tiered system of governance made up of both lay and religious trustees and fellows. While remaining true to its religious roots and traditions, it now claims to be “dedicated to religious belief no less than scientific fact” and stands for “values in a world of facts”.

Today, the private, coeducational research institution offers 67 undergraduate studies degree programmes within four colleges. These are the College of Arts and Letters, College of Science, Mendoza College of Business, and the College of Engineering. In addition, it is home to the School of Architecture, the First Year of Studies, and the Graduate School, Notre Dame serves around 12,000 students in all.

Its Graduate School was established in 1918 and is made up of four divisions: Engineering, Humanities, Science, and Social Science. Comprising 30 departments and serving over 2,000 students, it offers 26 doctoral degree programmes, 11 masters’ degrees, and four professional masters’ degrees. Around 97 per cent of students in the Graduate School receive full-tuition scholarships.

The university campus is spread across 1,261 acres and houses 171 buildings at a value of roughly $3.3 billion. The university’s operating budget is more than $1.5 billion with an endowment valued at close to $10 billion. Its expenditure from outside sources and research awards exceeds £130 million. The majority of this is federal government funding, while the remainder comes from industrial, foundation and other sponsors.

In international terms, Notre Dame attracts over 1,100 students from nearly 90 countries worldwide. As well as this, within its various academic departments, it hosts more than 350 international scholars annually.

It is estimated that more than half of the university’s undergraduate students embark on a year abroad during their time there. Destinations for study include countries from Australia to Brazil, China to France, Israel to Uganda, and many more in between.

Adding to the university’s international status, is its network of six ‘Global Gateways’ for academic and cultural exchange, located in Beijing, Chicago, Dublin, Jerusalem, London and Rome.

Introduction to the Quran: The Scripture of Islam

The Meaning of Rome: The Renaissance and Baroque City