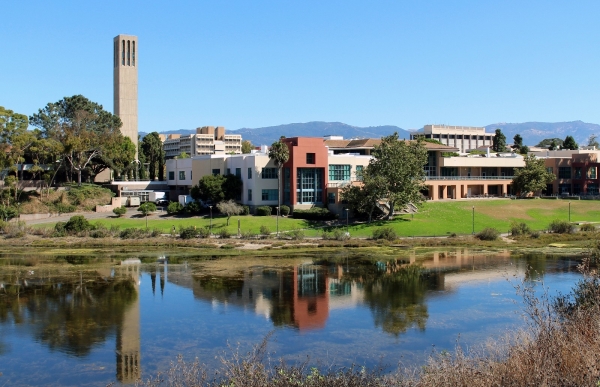 The University of California, Santa Barbara, often abbreviated as UCSB, is a prestigious research institute in the United States, which specialises in liberal arts. As a Public Ivy university, UCSB is well regarded among US universities. The roots of UCSB begin with the establishment of the Anna Blake School in 1891. The institution, which firstly taught economics, saw forty years of development and expansion before becoming part of the ten colleges united under the University of California public university system. The university, which offers over 200 degrees at all levels, is formed of three separate colleges: the College of Letters and Science, which trains professionals in humanities, fine arts, mathematics and social sciences; the College of Engineering, which focuses its interdisciplinary research on biomolecular and computation science and engineering; and the College of Creative Studies, a place which stimulates the creation of original work in Music and Literature. UCSB is also home to two professional departments: Bren School of Environmental Science & Management and the Gevirtz Graduate School of Education. Situated in close proximity to the city of Santa Barbara, UCSB’s premises cover over 4 km² of land between California’s Pacific coastline and the Santa Ynez Mountains. UCSB is one of the few American universities that has its own beach; a lagoon and specially designed walking and bicycle paths, which encourage and enable students to stay active, even during in busy exam periods. University campus has an active social life. The most famous event on campus is the Extravaganza free music festival, which gathers around 8,000 visitors every spring. The campus also hosts numerous student centres, which run: a local daily and weekly newspaper; radio station; and also campus events raising awareness among students about politics and diversity challenges. Famous alumni of UCSB include the actor Michael Douglas, and Nobel Laureate Carol Greider. The university’s motto translates as "Let there be light".