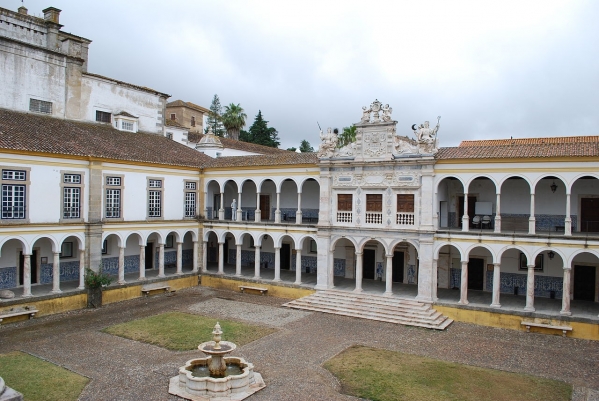 Located in a city 80 miles south of Lisbon the University of Évora is a mixture of the ancient and modern.

The ancient is represented by its foundation by Papal Ball in 1559, second only to Coimbra among Portugal’s universities and spectacular 18th Century lecture halls decorated with titles illustrating the disciplines taught within. The Colegio do Espirito Santo claimed numerous distinguished theologians among staff and alumni, including two saints.

But the venerable appearance conceals an interregnum of more than two centuries, between the suppression of the Colegio when Portugal banned the Jesuits in 1759 and the creation on the same campus of the new university - building on academic foundations laid since 1964 by the private Economic and Social Institute (ISESE) - in the dying days of the military dictatorship in 1973.

The first two new degree courses, in animal production and biophysics, were launched in 1975. The modern institution contains schools of arts, science and technology and social sciences along with the Sao Joao de Deus School of Nursing and the Institute of Advanced Research and Technology, which includes 19 research units. Between them they offer 43 undergraduate degrees, 85 master's and 34 doctoral programmes.

There is a strong emphasis on aiding the development of the surrounding Alentejo region. There are reserved places on the popular and successful music courses, which provide numerous winners at instrumental festivals, for pupils from schools in the region, a strong relationship with the Alentejo Science and Technology Park and cross-border co-operation including joint degrees with the University of Extremadura in Spain.