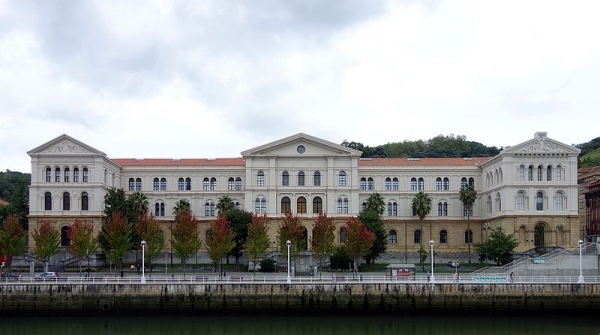 The University of Deusto is a private Roman Catholic university run by the Society of Jesus, and is the oldest of its kind in Spain.

The institution has campuses in San Sebastian and Bilbao, with Madrid being the home of the Deusto Business School.

The university was founded in 1886 as a result of the Society of Jesus wanting to relocate its Laguardia-based School of Higher Studies to a more central location and the community of the Basque Country wishing to have a university they could call their own.

After being closed down due to the Spanish government dissolving the Company of Jesus in 1932, the university eventually resumed teaching in 1940 after having been used as a military base, and then a supply centre and hospital during the war.

The Bilbao campus has its main building, or Edificio Central, opposite the famous Guggenheim Museum, and this building was the largest of its time in Bilbao. This campus is also home to the Main Hall Library (Salon De Grados) and the university's Gothic chapel, all of which contributed to the campus being declared a site of historical interest in 2002.

The San Sebastian campus has striking avant garde architecture and provides modern facilities such as the Matteo Ricci Technology Building, an arboretum and a new library.

The university's motto is “Sapientia melior auro”, meaning “Wisdom is better than gold”. As a Jesuit university, a focus is put on “faith, justice and culture” in teaching.

DEGREE IN BUSINESS ADMINISTRATION AND MANAGEMENT