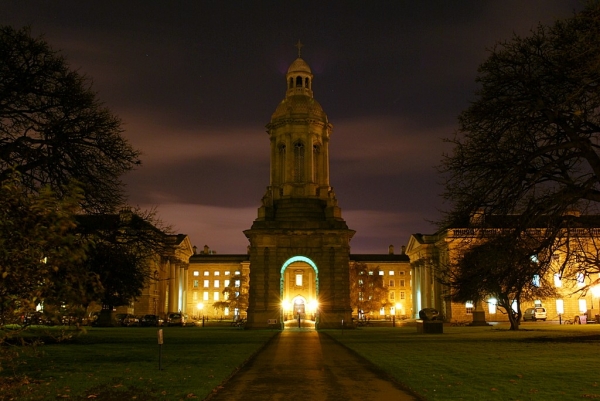 Founded in 1592, the University of Dublin, Trinity College, is located in the heart of the Irish capital.

It operates through three faculties: Arts, Humanities and Social Sciences, the faculty of Engineering, Mathematics and Science, and the faculty of Health Sciences. Between them, they comprise 24 schools offering a wide range of degrees and courses to around 17,000 students.

Its campus is made up of 51 acres of land in the centre of Dublin, including the Trinity Technology and Enterprise campus. As well as serving the university and its students, the campus acts as a major tourist attraction, owing to the fame, charm and beauty of its buildings that cover 220,000 square metres of land with a mixture of classic and modernist architecture.

The university library is the largest library in Ireland and dates back to the university’s founding year. It is home to over six million printed volumes as well as a wide collection of journals, manuscripts, maps, music, and the historic Book of Kells, a ninth century gospel manuscript presented to the university in the 1660s.

With over 100 college societies and 50 sports clubs, there is no lack of extra-curricular entertainment for students of the university. This is not to mention the wider range of delights that the city of Dublin has to offer. These include the Guinness brewery, Dublin’s world-famous pubs, and other cultural aspects of the city such as the Abbey Theatre, Phoenix Park and the River Liffey.

Among its alumni are the writers Samuel Beckett, Bram Stoker and Oscar Wilde, political philosopher Edmund Burke, and the former President of Ireland and UN high commissioner for human rights, Mary Robinson.

I would recommend trinity, the size and campus are great. The content is also good but could be more focused on practical applications in my opinion. Their administration has serious issues however, understaffed and not helpful. The exam...

I would recommend trinity, the size and campus are great. The content is also good but could be more focused on practical applications in my opinion. Their administration has serious issues however, understaffed and not helpful. The exam structure could be changed as well as there is too much pressure on end of year exams.