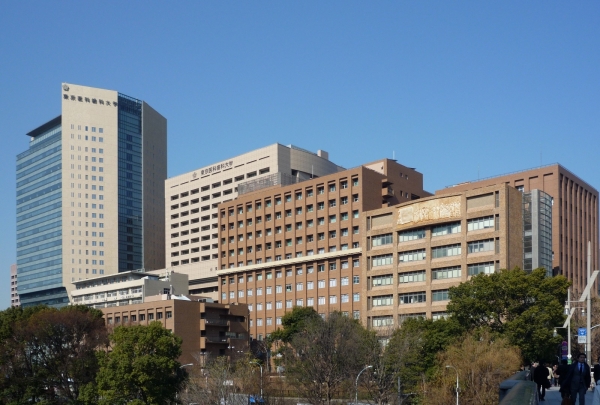 TMDU is a medical training and research facility based in Tokyo, and its beginnings can be traced back to the Eiraku Hospital, opened in 1899. The school of dentistry was opened in 1928 as the first of its kind in Japan, and currently TMDU is Japan’s only graduate school of medical and dental sciences.

The university’s logo is in the shape of a plum blossom which is the symbol of the Yushima Tenjin, the shrine to the god of knowledge which exists on the site. There are five petals in the blossom representing TMDU’s five faculties; Medicine, Dentistry, Liberal Arts and Sciences, Biomaterials and Bioengineering, and the Medical Research Institute.

Entrance into TMDU for full time students is predicated with a foundation year at the Liberal Arts and Sciences college on Kounodai campus. This is another unique aspect of the student experience in Japan, as aspiring medical professionals are taught modules outside of their specified majors, learning techniques and fields such as ethical standards and contemporary discussions in science and nature.

Some of the most pioneering medical research in Japan is conducted at TMDU. In 2014 a team at the department of Molecular Biology identified the key gene to cause the ageing induced bone loss ofosteoporosis. The university’s Medical Hospital still runs 24 hours a day, with a focus on critical care and serving those in the community.

TMDU has an active exchange programme with Imperial College London, a highly regarded world university, and each year students from TMDU travel to Imperial to engage in research activities lasting three to five months.