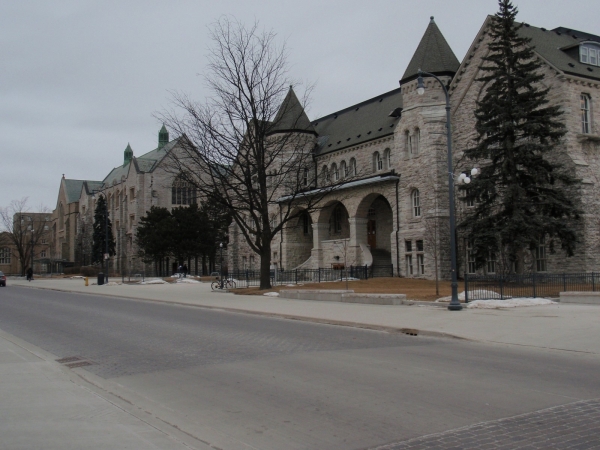 Queen’s University is one of Canada’s oldest degree-granting institutions, established in 1841 by Queen Victoria. The university is located in the city of Kingston, on the shores of Lake Ontario, in Canada, mid-way between Montreal and Toronto, and near the entrance of the Rideau Canal, a UNESCO world heritage site. A medium-sized, research-intensive university, the university is home to around 22,000 students from more than 100 different countries. It is organised across several faculties, colleges and professional schools, as well as the Bader International Study Centre located in the UK county of East Sussex. Queen’s prides itself on having research strengths in several areas, including computational science, engineering, globalisation studies, mental health, clinical biomedical sciences, sustainable energy systems and social issues such as poverty and bullying. The university offers its students a small, pedestrian-friendly campus comprising six libraries and several museums and arts centres, including the Agnes Etherington Art Centre and The Isabel Bader Centre for the Performing Arts: a $72million, 80,000-square-foot performance hall and learning space for theatre, music, film and media students Queen’s waterfront campus comprises heritage buildings made from limestone – Kingston is itself nicknamed 'Limestone City' because of the local limestone used in its construction. Its busy downtown area is a 10-minute walk away from campus, giving students easy access to all the advantages of a major city. As the original capital city of Canada, Kingston boasts 21 National Historic Sites. It is also a major university town, home not only to Queen’s but also the Royal Military College and St. Lawrence College. The student population as a whole totals more than 30,000. In 2013, the BBC listed Kingston as one of the top 5 university towns in the world, while personal finance website moneysense.ca ranked it as 3rd best place to live in Canada. With more restaurants per capita than any other city in the country, Kingston is also a foodie’s heaven and, as one of Canada’s most consistently windy cities, it’s also popular with sailors.

Global Water Use and Climate Change

Opportunities in Water and Health

Water on Earth: An Introduction

University of Calgary
Founded in 1966 and situated close to the Rocky Mo ...