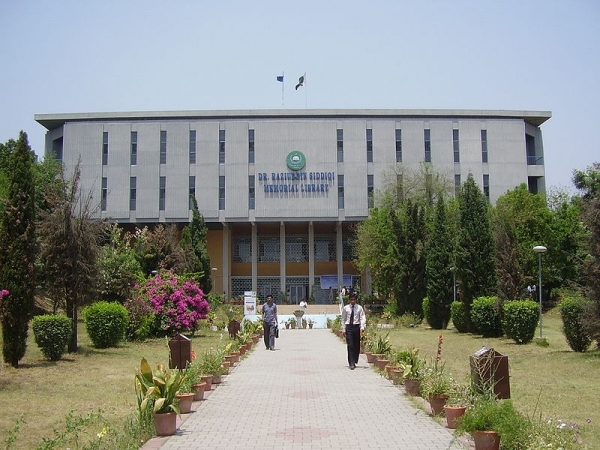 What initially began as a teaching and research institution, now offers both master's and undergraduate programmes.

It has established professional links with selected universities in Europe, South Asia and the United States. Moreover, a reasonable size of the faculty members of the university have worked in international universities such as Oxford, Cambridge, and Columbia.

The Quaid-i-Azam University has a variety of faculties and the main areas of research involve: biological sciences, natural sciences, social sciences, and medicine.

The campus covers an approximate area of 6.9 km² below the Margalla Hills; a hill range at the foothills of the Himalayas. The Margallas are an excellent place for bird watching – home to hundreds of species – while the hills are the perfect spot for hill walking, rock climbing and paragliding.

The university offers its students buses between the main campus and other major locations in Islamabad at reduced concessional rates.

Quaid-i-Azam University has well equipped classrooms, state of the art laboratories and libraries. Other facilities include hostels for male and female students, sports fields, and a mosque, which are all centrally located within the campus.

The vast campus is surrounded by the busy city areas and has grown into a comprehensive centre of academic activity. A canal running through the campus adds beauty to the surroundings. Various academic blocks sit towards the north side of the canal whereas the student residence blocks lies to its south.

Notable alumni include Shamshad Akhtar, who heads the United Nations Economic and Social Commission for Asia and the Pacific, Dr. Maliha Lodhi, who previously served as the high commissioner of Pakistan to the UK and Asghar Qadir, a renowned Pakistani mathematician and a prominent cosmologist.

Nishat
This comment was minimized by the moderator on the site

The university overall is an amazing place to interact and enhance ones social skills. The best part is the group discussions that they conduct. Overall the location of the university really enhances its status. Also, thre research guidance is...

The university overall is an amazing place to interact and enhance ones social skills. The best part is the group discussions that they conduct. Overall the location of the university really enhances its status. Also, thre research guidance is amazing. The university lacks facilities like WIFI, computers, LCDs, projectors, ACs etc. The teachers are sometimes not up to standards. Theres a need of roads and other infrastructure