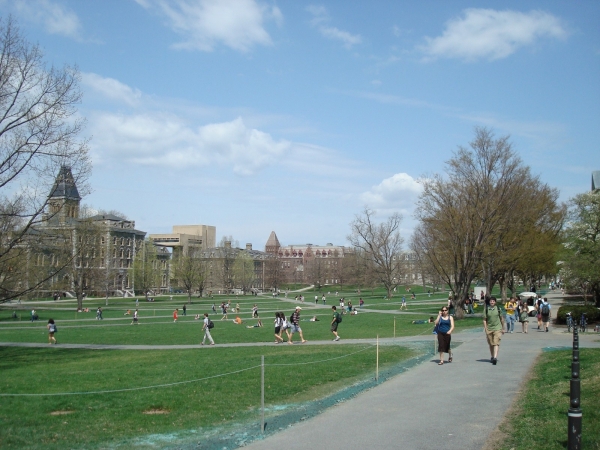 Founded in 1865, Cornell University is a private Ivy League university with a mission to “discover, preserve, and disseminate knowledge”. A federal land grant university with a private endowment, Cornell has six locations across the world. Its main campus in Ithaca, New York State, covers 2,300 acres of the Finger Lakes region, and is so extensive that students can go hiking without even leaving the university. It also has a graduate school of medical sciences in New York city, a base in Rome where students study art, architecture and urban planning, a centre for students to gain work experience in Washington DC, and a medical college at Education City in Doha, Qatar. Cornell counts 45 Nobel laureates among its faculty members and alumni. Other notable alumni include Tsai Ing-wen, the president-elect of Taiwan, and Huey Lewis, frontman for the band Huey Lewis and the News. The university boasts a number of unique student traditions, such as Dragon Day, when, in late March each year, a huge dragon is paraded across campus by first-year students of the College of Architecture, Art and Planning. Heckled by rival students from the College of Engineering, the dragon is then burned in Cornell’s Arts Quad. This ritual can be traced back to high jinx of the architecture class of 1901, and was formalised by students in the 1950s. Another tradition that has continued since Cornell’s opening in 1868 is the Cornell Chimes – daily bell performances by “chimesmasters”. These performers are selected by rigorous, 10 week long competitions, although chimesmasters do not need to have any previous experience playing the chimes. After climbing the 161 steps to the top of the historic McGraw Tower where the bells are housed, chimesmasters play from a collection of more than 2,500 songs, from musicians ranging from Schubert to the Beatles. (https://www.timeshighereducation.com/world-university-rankings/cornell-university)

A Hands-on Introduction to Engineering Simulations