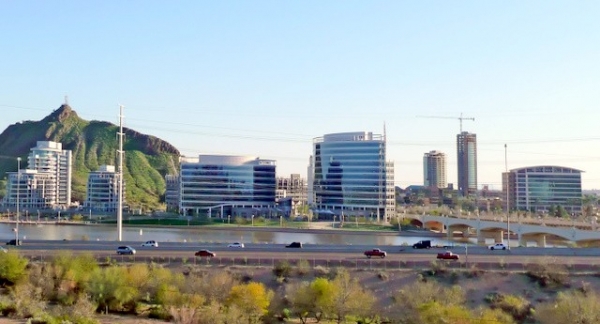 Arizona State University (ASU) began life as the Tempe Normal School in 1885 and was originally an institution for training teachers. It wasn’t until 1958 that it took the name it uses today.

ASU is a comprehensive research university and one of the largest public universities in the United States, with more than 80,000 students. The Tempe campus is in downtown Tempe and is considered the university's original campus.

It is seen as the prototype of the “New American University”, defined in its charter as “measured not by whom we exclude, but rather by whom we include and how they succeed; advancing research and discovery of public value; and assuming fundamental responsibility for the economic, social, cultural and overall health of the communities it serves”.

The university also boasts 25 Guggenheim fellows, more than 10 National Academy of Sciences fellows and six Pulitzer prizewinners. Stephen Doig and Jacqueline Petchel for journalism and mass communication, and Bert Hoelldobler for social dynamics and complexity, are all current professorial staff.

ASU is a university grounded in traditions. Since its early days, gold has been the institution’s prominent colour. It was chosen for the “golden promise, treasure and sunshine offered by the then Arizona Territory”. Around the same time, maroon and white were added to the scheme as part of the football team’s uniform. “The Inferno”, the name given to the student body attending ASU athletic events, all wear gold to show spirit and support. ASU sports teams play under the “Sun Devils” name, cheered on by the university mascot Sparky. ASU alumni are also dubbed “Sun Devils” and the easiest way to recognise a fellow “Sun Devil” is by seeing them sport the “Fork ’em Devils” hand sign – a universal symbol of ASU pride.

The university’s sports obsession has seen numerous alumni make it to the professional arena, with golfer Phil Mickelson and baseball star Reggie Jackson standing out. More than 100 “Sun Devils” have made it to Major League Baseball.

Brown University
Founded in 1764, Brown is the seventh oldest unive ...