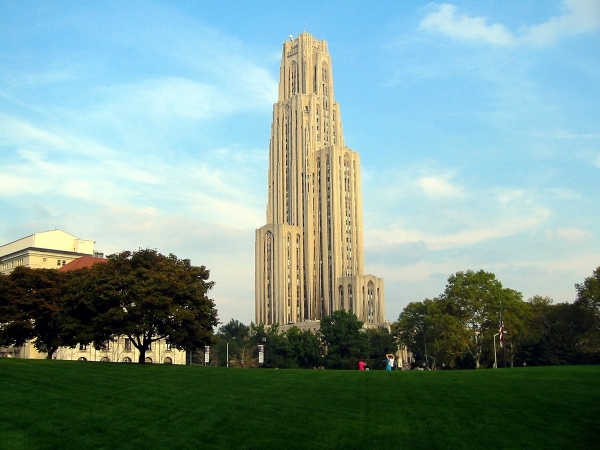 Starting out as little more than a log cabin in 1787 and named the Pittsburgh Academy, the University of Pittsburgh is now a public research institution with around 25,000 undergraduate and 10,000 graduate students with campuses across the entire state. It is made up of 16 schools and colleges, including the Dietrich School of Arts and Sciences, the Swanson School of Engineering and the School of Social Work. The main Pittsburgh campus in the Oakland area of the city spans 132 acres of land and houses a large number of the university’s notable buildings, such as the Cathedral of Learning. Built in 1926 and listed in the national register of historic places, the colossal 42-story cathedral is home to classrooms, libraries, computer labs, and a theatre. Standing at 535 feet, it is the second-tallest educational building in the world after Moscow State University’s main building. The Pittsburgh campus also has 17 libraries, the largest being the Hillman Library, which contains around 1.5 million books spread over five floors, with a study capacity for 1,500 users. The entire university library system is the 22nd largest in the US. The university’s schools of health sciences also benefit from a partnership with the leading non-profit Pittsburgh hospital, working collaboratively on such things as transplantation, oncology and psychiatry. The University Honors College also has stewardship of the Allen L. Cook Spring Creek Preserve, which acts as a 6,000-acre research lab for students that has been likened to an archaeologist’s paradise, complete with dinosaur fossils, 9,000 years of Native American archaeology and a portion of the First Transcontinental Railroad. The alumni network of the university numbers over 320,000 and includes Nobel laureates, Pulitzer prize-winners and Rhodes scholars. In 2003, Paul Lauterbur won the Nobel Prize in Physiology for his work on magnetic resonance imaging, an idea he scribbled on a napkin while at a local restaurant as a Pitt doctoral student.