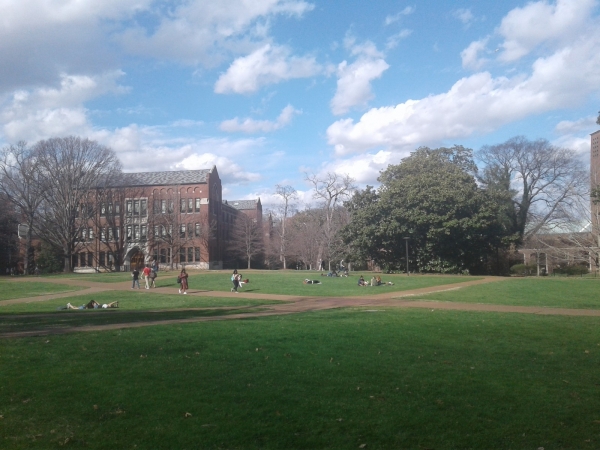 Vanderbilt University is a private research institution in the US comprising four undergraduate schools in the liberal arts and sciences, engineering, music, education and human development, and a full range of graduate and professional degrees. Its location, in Nashville, Tennessee – also known as ‘Music City, USA’ – is within walking distance of the city’s vibrant downtown area. The university was built when shipping and rail magnate, "Commodore" Cornelius Vanderbilt, donated a $1 million endowment in 1873. Its 330-acre campus has 120 centres and institutes, including the Institute of Nanoscale Science and Engineering, the Bishop Joseph Johnson Black Cultural Center, and The Freedom Forum First Amendment Center, which was established to support the First Amendment and educate students on issues of freedom of speech. The university has won three national championships and boasts a football stadium that seats over 40,000 people. Intercollegiate athletics teams are nicknamed Commodores, after Vanderbilt’s nickname, and wear the black and gold of a sea captain. Their mascot is also a commodore figure who wears a sea captain’s hat and jacket. Vanderbilt has its own hand sign, involving the extension of the thumb, index and middle fingers of the right hand to form a ‘V’ and a ‘U’ shape. The oldest building date on campus dates back to 1859, while others are registered National Historic Landmarks. The Vanderbilt Dyer Observatory is listed on the National Register of Historic Places. Though Vanderbilt was intended to be an all-male institution, this was never enforced, and women were admitted from 1875 onwards. When a fire burnt down the university’s Kirkland Hall in 1905, the schoolchildren of Nashville collected pennies to pay for a replacement bell. That same 2,000-pound bell still chimes in the rebuilt Kirkland Tower, on the hour, every hour. Vanderbilt has produced four Nobel Laureates in its history, as well as several congressmen, judges, NFL major league baseball players and one Poet Laureate.

George Washington University
Founded in 1821 by an Act of Congress, George Wash ...

University of Texas at Austin
The go-ahead for a university to be built in Texas ...