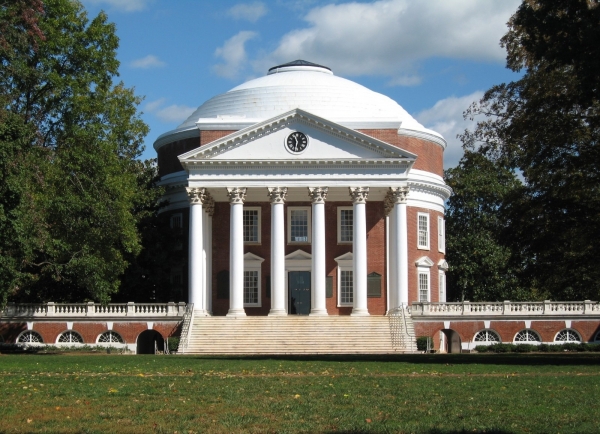 The University of Virginia is a public institution founded in 1819 by Thomas Jefferson, principal author of the Declaration of Independence, who also served on the university’s original board alongside two other former US presidents (Madison and Monroe). It’s located in Charlottesville, Virginia, a UNESCO World Heritage Site and bustling tourist centre just east of the Blue Ridge Mountains. In 2014, Charlottesville was named by the U.S. National Bureau of Economic Research as the ‘happiest city in America.’ The university is known for its student-run honours system, introduced in 1842 after a professor was shot and killed on campus. The honours system holds that students must not lie, cheat, or steal. Breaking any of these three rules may result in a trial before students, without any faculty present, and, if proved guilty, expulsion. It is also renowned for its secret societies and many of the university’s 20,000-plus students are reputed to be members of societies that go by the names of ‘Seven’, ‘IMP’ and ‘Z’. The Jefferson Literary and Debating Society, dating back to 1825, is the oldest continuously debating student society in the US and continues to meet at 7.29pm every Friday in Jefferson Hall, as it always has. When Jefferson was designing the university, he placed a library, not a chapel (as was customary), at the centre of the institution to indicate a commitment to the pursuit of knowledge. In 1815, the newly-formed Library of Congress acquired Jefferson’s personal collection of 6,487 books on philosophy, science and literature. The library still plays a central role in the life of the university, offering five million print volumes of books, 16 million manuscripts and home to a vast digital archive that works to preserve physical works, such as the Jefferson Papers, as well as rare video from the Civil Rights Era. The University of Virginia has produced eight NASA astronauts, eight Pulitzer Prize winners and 51 Rhodes Scholars – the most from any state-supported university and the most in America’s South. Its alumni includes polar explorer Richard Byrd, author Edgar Allen Poe, artist Georgia O’Keefe, and Tina Fey, writer, actress and TV producer.

Getting Started with Agile and Design Thinking