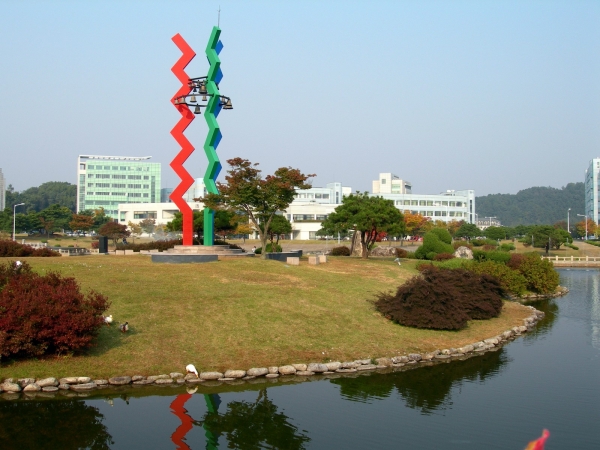 Located in the science and research hub of Daedeok Innopolis in Daejeon, South Korea, the Korean Advanced Institute of Science and Technology has developed into an active institution, often placed among some leading universities in global scientific education and research. KAIST has connotations of academic excellence, innovation and entrepreneurship, but also the launch of large-scale projects. The university often ranks highly among other universities of a similar age. KAIST was established in February 1971 as Korea Advanced Institute of Science, with a loan given by United States Agency for International Development. The university aimed not only to educate young researchers in science and engineering, but also to provide a solid basis for the development of future higher education institutions in Korea. Its structure was created by an international team, which included the American electrical engineer and vice-president of Stanford University Frederick Emmons Terman. Unlike other public institutions in South Korea, KAIST has freedom to decide upon its entry requirements and course structure, which gives the university a special status. Today, KAIST has a rich academic portfolio in disciplines such as physics, mathematics, engineering, humanities and social sciences, business and management. The courses are delivered by 6 colleges and 2 schools, with over 33 divisions. KAIST’s unique institutes include the National NanoFab Center, which conducts research into nano-devices and their potential applications. KAIST consists of 2 major campuses situated in Daejeon and South Korea’s capital Seoul. They offer over 25 dormitories, 4 libraries and a medical centre. To ensure students are actively engaged in the campus cultural events, the university organises traditional opera and jazz recitals. Some of the most famous KAIST former faculty members and graduates are the electrical engineer Soon-dal Choi, mathematician Gi-hyong Gho and the physicist Chang Hee Nam.